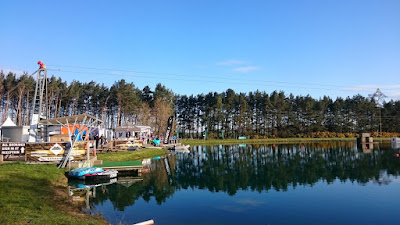 Port Seton to Dunbar. Appears straightforward for a runner hoping to use public transport. So a week before our holiday to Sri Lanka, I booked myself an entry in a 50km ultra along the John Muir Way. I then promptly forgot until I read the race instructions a few days prior to the race.

Good news - We were in possession of a car hire for the morning so I could be driven to the start. I also obtained my British Citizenship this week which isn't too relevant for the race but just good news in general. Who knows, maybe dual citizens get dual stamina? 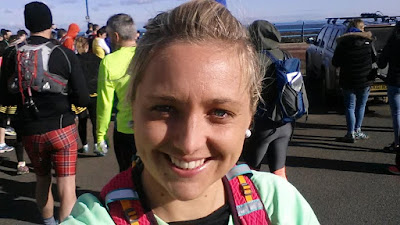 Bad news - Race registration closed an hour before the start and was actually taking place at the finish line. We were coming from Angus. That meant leaving the accommodation by 5:30am. Not quite the 'slide out of bed the back of 8am and arrive at the start line with a decent ten minutes to spare' plan that I had originally thought of.

Foxlake's setup is great and I look forward to going for a swing on their rope adventure but perhaps on the only day of the year that Scotland cracks twenty degrees; that water looked cold and there is no doubt I would fall in.

On the bus I sat next to some tartan lycra worn by Donald and was privileged to use the toilets at Port Seton. A privilege because this particular toilet block has won 'Toilet of the Year' awards for multiple years. Unfortunately none recently and probably none for a while after a pile of runners have been through. The women's line is longer, a first for any ultra that I have been in.

At the start I head to the back as there is also a pairs event, where relay teams can run 25km each. No need to get caught up with the speedy club runners. The local councillor has doned tartan trousers and is starting the race off. Promenade and then sand. I will accept a little sand as we are by the sea. But only a little. Maybe I should change my five and a half hour estimate to a six hour estimate... I cruise along amongst some bumblebee-ballet-skirted relay runners, first laughing at the holidaymakers in their caravans on the cold Scottish morning and then imagining myself lounging in one of the grand mansions we pass along the coast. I chat to yellow-vest-man-number-two who is in the relay with his son as we come into the first checkpoint in Aberlady (8km-ish). Unfortunately my plantar fasciitis feet are grumbling to each other so I have to continue on and miss out on the pretzels. 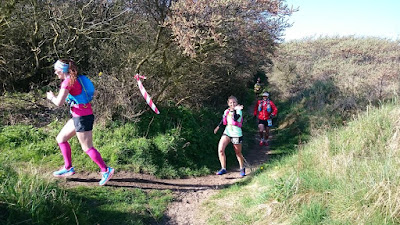 Due to the severe bout of laziitis that I have been suffering from for eighteen months, I am not in the best shape and have decided to cruise through the scenery slowly for the first half and then evaluate the body. There's a gradual incline on tarmac which I plod up confidently while two runners fly by me. Uncertain, I pick the pace up a little only to slow down again further on as I pick off a few more runners in a row than was necessary. It is hard to decide what to do; keep plodding because I am unfit or huff and puff away because it's not really and ultra anyway? More of an elongated marathon... The course zig zags around farmyards and stone walls. Despite having run between Edinburgh and North Berwick on numerous occasions (before my laziitis diagnosis), I've clearly not ever run on the John Muir Way properly as I hardly recognise the trails.

Some uber friendly marshals help me across a road while I wave frantically at a black car. Turns out that the driver is not my husband Scott, but rather a now-confused older man.  The second checkpoint comes at Archerfield (15km-ish) where Scott is waiting having enjoyed some breakfast. (A future note for any spectators, the café here is very nice). Due to a porridge mishap in the car, my breakfast of some blueberries and a tangerine wore off long ago. Deciding on which tray bake to eat at the checkpoint is difficult. I decide as long as it is not that one labelled 'Aussie bites' I will be ok. Those ones are probably there just to poison me. 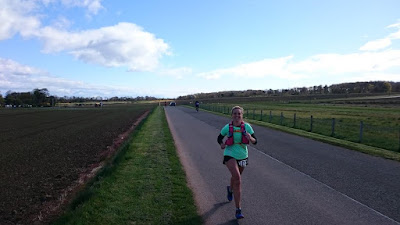 Next it is winding through woods, fields and fancy estates on our way to the halfway mark at North Berwick. Despite the car being iced over in the below zero temperatures this morning, and all the runners hovering in the buses until the last minute to stay warm, it now is a warm and glorious day in East Lothian. Coming into North Berwick I expect a flurry of relay runners to come past me in their final dash to the changeover. As most of the runners are likely in front of me already, this does not happen. Right, then first left and follow the signs to the beach. I promptly forget the instructions and stand about until another runner comes. It is a slog along the beach in full view of laughing spectators.

At the checkpoint there is much excitement over the cola. I personally throw back three cups and express much joy for the banana pieces. I have been hungry and thirsty. Compliments are given to my freshness which I put down to having put a full face of makeup on in the car this morning. My only lapse has been a lack of lipgloss. Dehydration always shows up dreadfully on my lips.

Out of the checkpoint and I am again uncertain as to where to go. Or maybe I did know but did not want it to be true as the yellow arrow was directing me to the beach. There was no hard sand here AND a perfectly good road I could have been running down instead. Around the corner I find a runner dumping sand from her shoes. Next year the run should go up Berwick Law. I know another runner did go up but he organised charity sponsorship for it in advance. I have never been up and it would have been a good excuse if it was a compulsory checkpoint! 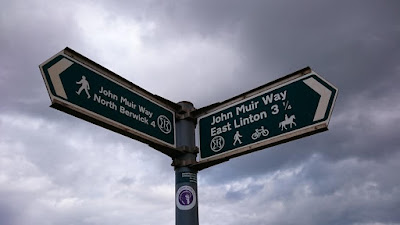 After the heat some hail starts. Mister Rainjacket is in my bag but is it heavy enough yet? No. Some more undulations. Mud sliding. Runners are starting to slow and I am starting to go a little faster. Friendly marshals with some water. I am well parched and hungry again. I shove Honey Stingers in. Err, why is there a runner coming from my right? The marshals look concerned. Apparently loads of runners cut out a few miles accidently. It's from all the zig zagging. You can see runners places so you think you should go there. More mud sliding. I almost go right over. That would be funny if I had more gear to put on at the end but I do not. I am sure I was extremely graceful throughout the sliding though.

I then catch Gordon who has been guiding me from afar for some time in his vibrant yellow. We stand looking at a sign pointing left. I am thinking of going down a small track as I have seen some other runners on it. Later I will think about how this wouldn't make sense as it is a 180 degree turn back onto ourselves. Fortunately a runner from behind calls for us to take the larger track on the left. It's a relay runner who has already flown passed me. Nothing like a bit of extra mileage for bragging rights to your relay partner. 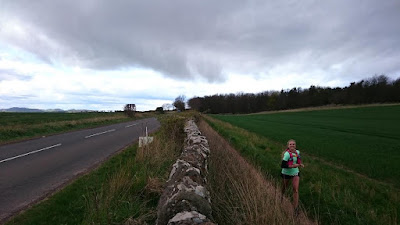 Shortly after there is some more light hail and I decide to press on a little. I do not fancy getting caught in a downpour and my legs are feeling good. With many runners participating in their first ultras, people are starting to slow down. Well done red t-shirt... blue t-shirt... red t-shirt number two... white t-shirt... red t-shirt number six hundred and one... must be the colour of the season. Hello undulation... ohhh check point. Cola. That's exciting. I'm out of throat lozenges. More tickly cola. One guy isn't looking too good with an ice pack on his knee. I overhear someone say that this is the marathon mark. Just 8km to go. I've no idea how long we have been out for but we are still running from the rain clouds.

Skinny trails and a few people with earphones in (naughty) so it is a bit awkward to get past them. A few people with cramps. They'll make it to the finish ok now. A 600m to go sign, very quickly followed by a 400m to go sign. A deer runs across the track. I'm so rural. For the first time, I cannot see any runners ahead. A 200m to go sign appears after what must have been at least double the distance! My power thighs are pounding along as I run across the grass to a very quiet finish. I think that the spectators were so cold that their cheers were frozen.

A jolly fun event on a lovely mixed-terrain course. Pleased to have finished in four hours 39 minutes; a hour quicker than my expected finish time and still feeling good at the finish. I came third lady which was such a surprise that I missed prizegiving because I was in the line for coffee. A girl needs to have priorities! Well done to Avril who flew in for first lady. Now was there a rumour that a longer race was being added for next year... 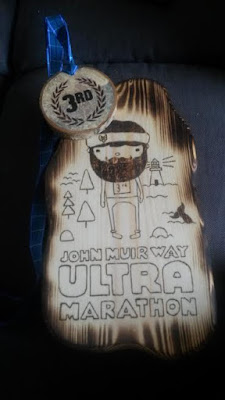 Marton to Wanganui Relay (or ultra)

September 16, 2016
There is a place in New Zealand's North Island called Marton. There is another place, 30-something kilometres away by a main road, called Wanganui. If you decide to take the country road between the two buzzing metropoles, the journey will take you a pleasureable 66km. And that is the prefered route of the Wanganui Harrier Club who organise a relay between the two towns.  Note; despite the joyous experience I had between these two villages, there really is no need to visit either town if you are a tourist in New Zealand.

I emailed the race organiser, Bill, on the Tuesday before the race asking if I could enter but would need to give him my entry form and payment on the day. I received a very friendly reply and was in the race. I wish all ultras would be this straightforward to enter.

Marton to Wanganui at a distance 66km.

Flat road with some inclines and gravel.

Ascending? Did anyone else read that? I like going up hills. Sounds like a good race. In 2014, when Keith Hughes and the gang of Incredibles entered I wasn't tempted in the slightest. Way out of my comfort zone. But then Johnny Fling mentioned the race and practically begged me to come. He's like that; pushy. A race at the beginning of the year sounded good as I was going a bit crazy after having had 2014 off. And by off I mean that I got fat. There was a race in Cornwall but that's a bit dull. Plus, Gran Canaria is easy to get to. Simples decision really. Upon returning to the nation mid January, there was the small issue of plantar fasciitis. With this on the mend, I had a new visitor in the form of ischia…
4 comments
Read more 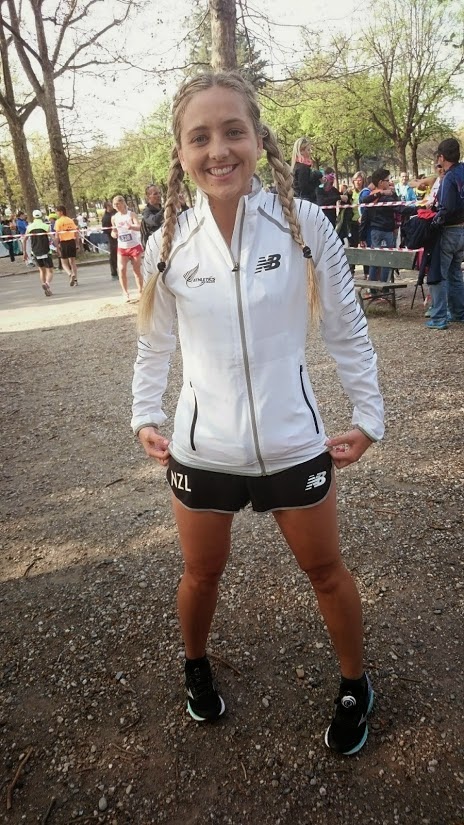 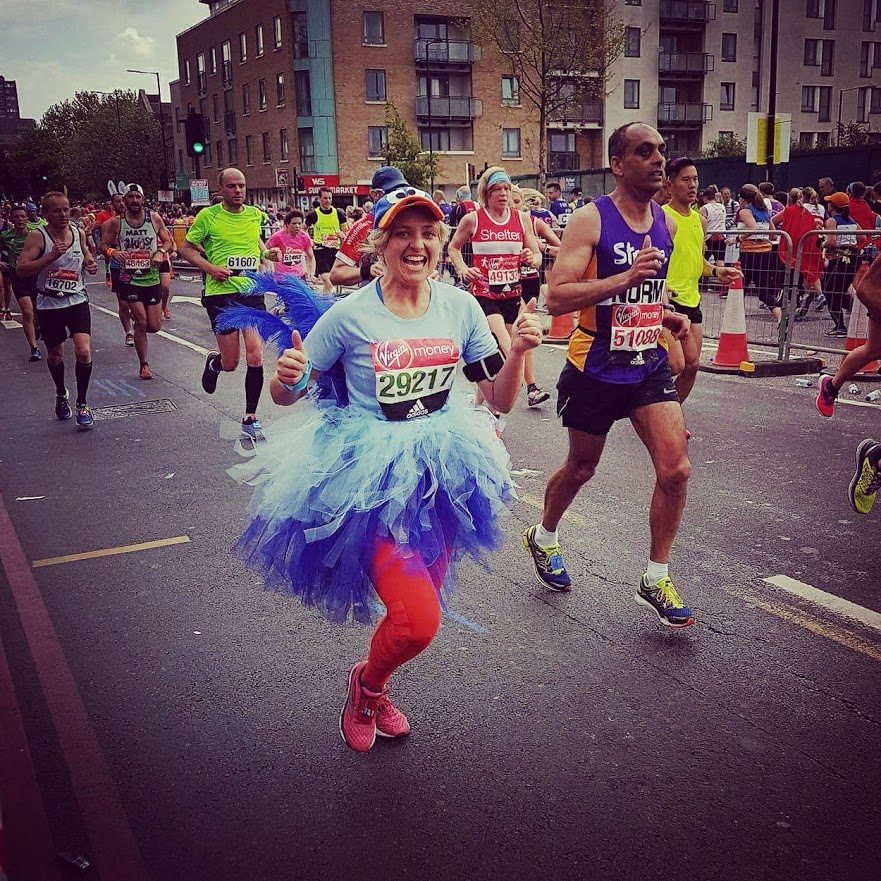